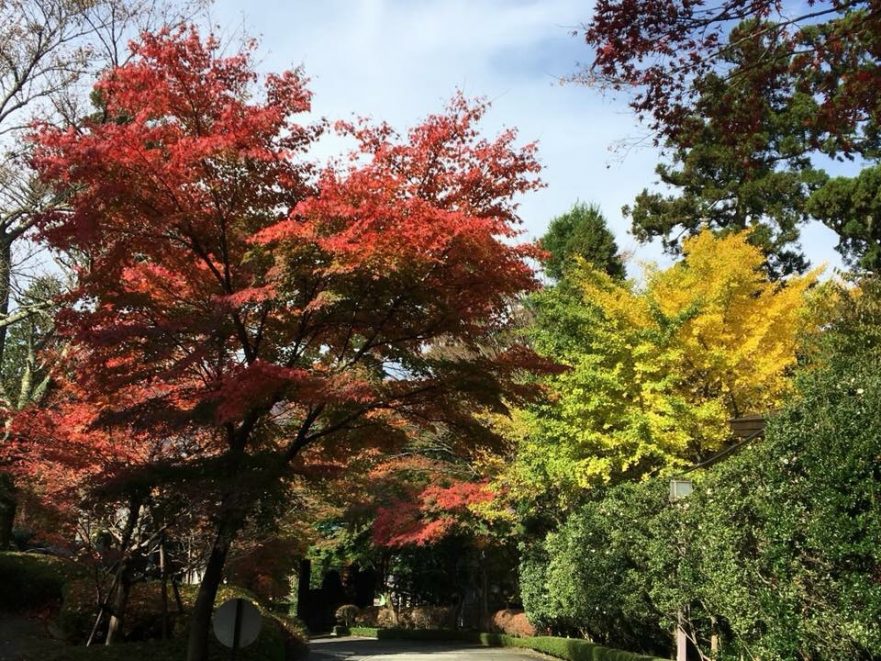 Do you want to see the autumn foliage in Tokyo? Here are the top 10 spots and the dates to see autumn colors (koyo) in Tokyo! The dates listed are projected based on the best viewing on average from the last few years.

Rikugien is a traditional Japanese landscape garden and a very popular autumn color spot in Tokyo. Some of the best spots to visit here are the hilltop viewpoint, around the Togetsukyo Bridge, and around the canal that runs by the Tsutsuji no Chaya teahouse.

There is also an illumination event from November 19th to December 7th from sundown until 9 PM at a cost of 300 yen per person.

Koishikawa Korakuen
Late November to early December
Koishikawa Korakuen is a traditional Japanese landscape garden that has a main pond surrounded by dozens of maples trees that change colors to red and orange in autumn.

Icho Namiki (Ginkgo Avenue)
Late November to early December
The Icho Namiki is the popular, ginkgo lined avenue in Meiji Jingu Gaien Park. The uniquely trimmed trees turn a brilliant golden color in late November, drawing crowds of people to stroll under the leaves or relax at one of the sidewalk cafes along the street. The Icho Namiki starts about one block from Aoyama-Itchome Subway Station.

Shinjuku Gyoen
Mid November to mid December
A large park with a variety of trees and a fairly long season, Shinjuku Gyoen is an attractive place to escape the city and see some autumn colors. Some of the best areas in the park to see the changing leaves are the Japanese garden and the Momijiyama (“Maple Mountain”).

Mount Takao
Mid to late November
Mount Takao in the mountains west of central Tokyo is a busy hiking destination and one of Tokyo’s most popular autumn color spots. A network of well traveled trails lead up the mountain, but visitors can save some time by taking a cable car or chair lift part way up. There are nice views from the summit out over the autumn colors along the slopes.

Yoyogi Koen
Late November to early December
The best autumn colors of this large, western style park are not found around its central lawns. Instead, head to the southern side of Yoyogi Park where there are beautiful stands of red maples and brilliant yellow ginkgo trees.

Imperial East Garden
Late November to early December
The best place to see autumn colors at the Imperial East Gardens is the Japanese style Ninomaru Garden built in the second circle of defense of the former Edo Castle. In addition, several ginkgos and other trees are scattered around the castle walls and grounds of the spacious park.

Mount Mitake
Early to late November
Part of the Chichibu Tama Kai National Park, the 1000 meter tall Mount Mitake is a popular hiking destination within easy reach of central Tokyo. Autumn colors here can be enjoyed a week or two earlier than down in the city center.

Hama Rikyu
Late November to early December
Although not an outstanding autumn colors spot, there are some areas in Hama Rikyu that display nice colors, particularly along the northwestern shore of the garden’s large, central pond.