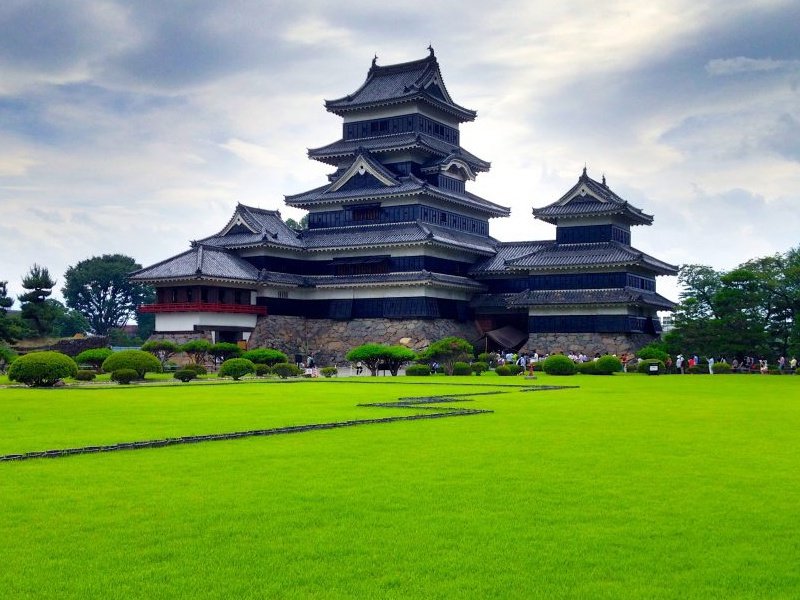 This hilltop castle is located in Hyōgo Prefecture. The castle complex comprises 83 buildings and Himeji Castle is said to be the most pristine example of traditional Japanese castle architecture. Its exterior is a dazzling white, and many say that the structure resembles an egret taking flight. The samurai warrior Akamatsu Norimura built the castle in 1333 as a fortress, and the initial structure has been subject to significant remodeling schemes over the course of the past several centuries. Namely, several buildings were added as the castle changed hands. The castle miraculously survived WWII unscathed even though surrounding areas were bombed mercilessly. Like many castles on this list, Himeji Castle is a UNESCO World Heritage Site.

Matsumoto is one of Japan’s principal historic castles; indeed, it is considered a National Treasure of Japan. Because of its black exterior, the castle is commonly known as the ‘Crow Castle.’ Matsumoto Castle resides in Nagano Prefecture, an easy train ride from Tokyo proper, and is a hirajiro, or flatland castle, which distinguishes it from many others that were strategically constructed on hills or surrounded by rivers. Built in the late 16th century, the fortress consisted of a series of moats, a complex system of walls, and gatehouses. The castle was created during the Sengoku period, a time of considerable social upheaval in Japan. In the late 1800s, it was sold at auction for the purpose of redevelopment. A local high school principal spearheaded the renovation efforts and raised funds to carry them out.

Nagoya Castle is located in central Japan. During the Edo period, Nagoya stood within the most significant castle town in the area, Nagoyaa-juku. The castle of today was constructed in the early 17th century; however, its origins date back even further than this. The original castle was called Yanagi-no-maru, and the military governor Imagawa Ujichika built it as a gift for his son during the 1520s. Shortly after its completion, a warlord seized the castle and changed its name to Nagoya Castle. During WWII, the castle was used as a military headquarters and became the site of a POW camp. It was heavily damaged during US army air raids.

Osaka Castle is one of Japan’s most famous landmarks. As with many traditional Japanese castles, the Osaka Castle is built on a man-made stonewall; it is eight stories high and surrounded by a moat. The castle was erected on the site of a temple and former imperial palace. In the late 1600s, there was a massive fire in the castle as lightning struck the gunpowder keep, setting everything ablaze in a massive explosion. During its short span of use, the castle played an important role in Japanese unification. In the late 19th century, the castle underwent much needed repairs after years of neglect. The castle was featured in the 1955 film Godzilla Raids Again by Tomoyuki Tanaka.

Completed in 1611, Matsue Castle is one of the few remaining medieval castles to still contain its original wooden structure. Though the fact that the castle is predominantly wooden, a major fire hazard, the castle was built after the great war of feudal Japan, so it never saw battle. It is nicknamed the ‘plover castle’ due to its structure and coloring, which is reminiscent of the type of bird. It is one of the oldest castles in Japan and the only one remaining in the Sanin region. For a 234-year reign spanning over ten generations, Naomasa Matsudaira and his descendants ruled the castle. Today, only the castle tower remains.

The Tsugaru clan built the castle in the early 1600s after raising enough money and resources through a number of strategic alliances. It too was destroyed when a lightning bolt struck the gunpowder magazine only about 15 years after its construction – it was rebuilt two centuries later. Today, the surrounding park is one of the most notorious cherry blossom spots in the country. The park contains 2,600 cherry blossom trees, which were planted on the grounds in 1903. Hirosaki Castle is also the site of the annual Hirosaki Castle Snow Lantern Festival, attracting hundreds of thousands of visitors.

The Hikone Castle is located in the Shiga Prefecture. It is considered to be the most important historical building in the entire region and was constructed at the orders of the son of the reigning regional lord, or daimyo. During the Meiji Period of the late 1800s, many castles were commissioned to be dismantled. Hikone Castle was spared by request of the Emperor himself. Many features of the castle are, indeed, considered Japanese cultural assets. These include the stable and three different turrets incorporated in the castle’s architecture. In addition to the Matsue Castle, the Hikone Castle is another on this list that still has its original structure.

You will find Shimabara Castle in the Nagasaki Prefecture. It is a hirajiro castle that is located near Mount Unzen and Ariake Bay. Shimabara Castle is known for its moats, which are up to 15 meters deep and 50 meters wide in some areas. The daimyos of Shimabara Castle fostered an oppressive regime, executing many Christians living in their territory and significantly raising taxes to pay for the castle. In the late 1800s, part of the castle was turned into school grounds and much of it became farmland. The castle is now a museum that contains exhibits on local culture and the Shimabara Rebellion during feudal times.

The bright crimson Shuri Castle is located in Okinawa and served as the palace for the Ryūkyū Kingdom. The castle was an important stop in Japan’s East Asian maritime networks. It dates all the way back to 1429. It was the largest castle on the island, though not necessarily the strongest militarily or economically. The castle has a long history of economic activity, and it has changed hands many times. In the beginning, the Ming Dynasty sent many Chinese families to live here for business purposes. In 1853, the infamousCommodore Matthew Perry paid a visit here as well. The United States occupied the grounds for nearly 30 years following WWII.

One of many castles located in Okayama Prefecture, this castle was built in 1597 after almost 20 years of construction. Its owner was captured just three years later and died shortly thereafter without leaving an heir. It is also nicknamed the ‘crow castle’ because of its black exterior, which is often contrasted with the neighboring, white Himeji Castle. In its heyday, the roof of the main keep consisted of gilded tiles and golden fish gargoyles. Okayama Castle’s main tower was destroyed during WWII. During the 1960s, the castle was restored, and its interior now features air conditioning and elevators. The golden fish gargoyles have been returned to their perches, and entry to the inner sanctuary is free. Here you can find multiple displays explaining the castle’s history.